Given where she's been lately, it should come as no surprise that Megan Thee Stallion has chosen to dispense with pleasantries on her new album. The ferocity of Traumazine begins with its cover, which shows her visage in an emotive triplicate reminiscent of Cerberus, the three-headed hellhound of Greek mythology. In Dante's Inferno, Cerberus resides in the Third Circle of Hell with the gluttons, where he "rends the spirits, flays, and quarters them." As an executioner, Megan is more precise. On the Rico Nasty collaboration "Scary," she renders both her lyrical and physical form as a foreboding omen for her detractors: "Say my name like Candyman, and bitch, you know I'm there / These hoes wish they saw me when they lookin' in the mirror."

Megan is also used to being the life of every party. Her bawdy, unabashed 5'10" presence quickly won her devoted followers, and as her star rose she engaged in rowdy revelry with these loyal supporters at famed roving spaces called "Hottie Parties." She was so eager to please that base — the fans who helped elevate the carnal slow-burn "Big Ole Freak," from her 2018 EP Tina Snow, into her first bona fide hit — that she continued to perform as the good-time gal they had come to love even as she entered what would be the most traumatizing years of her life. Where her debut studio album, 2020's Good News, clanged against the public awareness of that turmoil, Traumazine leans into it: making space for ruminations and grief, managing the swirling emotions produced by years of acrimony and cathartically letting them rise to the surface. In reaching for a more confessional mode, she reaffirms her commitment to talking her talk.

At her best, Megan is a lyrical virtuoso who brings motion and menace to her self-reliant songs, crafting innovative rhyme schemes that both thrill and tantalize and then coating them in her seductive Houston drawl. She bares her teeth on the opening track, "NDA," weaving in and out of Memphis producer Hitkidd's hi-hat heavy production to make mincemeat of multi-syllabics: "They take all the hate that they got for me and they market it / When they shit ain't poppin', they usin' Megan for marketing /And they ain't got enough in they budget for me to talk to them." "Ungrateful," featuring Memphis rapper Key Glock, is in conversation with her cult-favorite "Still Tippin' Freestyle" — doubling down on the whiplashing flows of that verse, she swings her bars around the highs and lows of the melody. The ease with which Megan navigates collaborations with producers and rappers from Memphis only reinforces the strains of the one-time Three 6 Mafia member Gangsta Boo in her DNA. On "Who Me," she corrals Pooh Sheisty, another Memphis native, into form around skipping drums while she quips, "I feel like Biggie, who shot you? But everybody know who shot me, bitch."

Trauma is cyclical, especially when you are forced to process it before the world. Megan's string of accomplishments — three Grammy wins, two chart-topping records and a college degree — has been stymied by a series of misfortunes. In 2019, her mother, a stabilizing figure in her life, died from brain cancer. An ongoing dispute with her label, 1501 Certified Entertainment, has complicated her career. But most pressingly, in 2020, she was shot in an incident involving the rapper and singer Tory Lanez, and the near-constant refutation of her version of events, in both the courtroom and the court of public opinion, has been an obvious drain of her energy. In the songs of Traumazine, she reckons with these events by probing at her own feelings, by returning to familiar haunts, and by reaffirming her skills as one of rap's bar-for-bar heavyweights.

The more introspective tracks, like "Anxiety," perform a sort of sleight of hand, expertly using upbeat production to cover darker material: "If I could write a letter to Heaven / I would tell my mama that I shoulda been listenin'/ And I would tell her sorry that I really been wildin' / And ask her to forgive me, 'cause I really been tryin'," she raps. It's a brave decision to expose her wounds, metaphorically or otherwise, as she has experienced repeated recriminations for that choice. But in this instance, she is not seeking to exonerate herself, but offering insight, showing that even one of rap's most self-confident women can be plagued by the deepest insecurities. "Not Nice" and "Plan B" dispense with the pretense of easing a listener into her frustrations, launching directly into the depths of what feel like venting sessions in a private journal: expletive-laden, unrestrained and uncouth.

For those who have long clamored for Meg to return to the charmingly commanding Foxy Brown-meets-Pimp C character work of Tina Snow, there is plenty of the sample-heavy, raunchy and nonchalant music that defined that era. This reset is exemplified by "Consistency," which uses a sample of The Isley Brothers' "Between the Sheets" as cushion for breezy, brazen raps tailor-made for a late-night Instagram Stories caption. "Ms. Nasty" is a short and pithy return to erotic form, whipping her words around with the force of a lyrical domme. She playfully takes the reins of the beat, which bucks like a mechanical bull, as a clear demonstration of her undeniable control: "P-I-M-P, put it in my pocket / If it ain't 'bout my money or me nuttin', we ain't talkin'."

At a lengthy 18 tracks, some of the album's potency gets diluted by more inert moments. Its formulaic and unmemorable lead single, "Pressurelicious," showcases Future at his most asynchronous. "Sweetest Pie," which caps the album, is an abrupt tonal shift, and seems to serve little purpose beyond guaranteeing a streaming-inflated RIAA certification at the expense of cohesion. Similarly, "Star" is an unexpected and awkward intermission from Megan's more aggressively raunchy melodies.

But for every swing and miss, there is also a statement. Despite Meg's rapid ascent into popstar status, she always roars the loudest for the hometown that molded her, helped craft her sound, and continues to stand beside her. The Juicy J-produced "Southside Royalty Freestyle" stands out as an ode to the Third Coast, placing Megan amongst Houston mainstays Sauce Walka, Lil' Keke and Screwed Up Click's Big Pokey. "It takes 10 female artists to make a Megan Thee Stallion," Sauce Walka boasts on his outro, before reminding everyone of Lil Keke's heralded opening bars on the DJ Screw Houston classic "Pimp tha Pen": "I'm draped up and dripped out." The posse cut again reconnects Megan with the hometown sound, in what feels like a search for comfort. The reminder is necessary because she has grown into a pop-rap luminary, and elsewhere on the album, she stands resolutely in her reputation, as if posing for the cameras. "Her," a paint-by-numbers dance single that beats the Azealia Bankses of the world at their own game, plays like a statement of renewed purpose. In its verses, Megan slyly addresses any barb or insult that could be lobbied at her before the mud-slingers can even bother to hit send: "No matter what they do or say, it ain't no gettin' rid of me."

Megan joins a long line of women seeking agency through music — manifesting her anger, her resentment, and her full-bodied sexuality — attempting to define herself on her own terms after watching the public wrestle her story away from her, leaving her with the carnage. Listening to Traumazine brings to mind another time when one of the world's biggest pop darlings attempted to reclaim her power after a high-profile abuse scandal. For Rihanna, then a superstar in the making, the daring Rated R helped redefine her, changing her image and setting the tone for the rest of her career. While Traumazine is not the transformative pop revelation that Rated R was, it is absolutely a declaration, and at times, a provocation, one in line with her freestyle breakthrough. It is a testament to her skill that she displays such command; it is a shame that she even feels the need to prove herself once again. 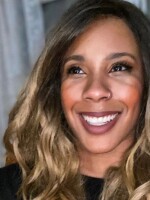 Shamira Ibrahim
Shamira Ibrahim is a Brooklyn-based culture writer by way of Harlem, Canada, and East Africa, who explores identity and cultural production as a critic, reporter, feature/profile writer, and essayist.