Long a taboo topic, "Death Doulas" like Carbondale's Akaljeet Khalsa are destigmatizing how we die

One commonality in the human experience is that eventually, not knowing exactly how, when or where…each of us dies.

And while our culture and society is excellent at welcoming new life, some argue we’re not as good at stewarding the end of life. Now, there’s a trending movement that supports demystifying and destigmatizing the death experience.

Local "death doula" Akaljeet Khalsa is on the forefront of this movement. She recently completed the Conscious Death Coach and Sacred Passage Doula certifications at the Conscious Dying Institute in Boulder. She recently co-hosted the documentary screening of A Will For the Woods at the Third Street Center. In the film, Clark Wang, who is a psychiatrist and musician, plans for his own green burial upon discovering he has a finite time to live.

Khalsa asserts that for each of us, every breath is a step closer to death. And she likens dying to a bridge that each of us will cross over, with Five Pillars—or main categories—of things to consider and plan for, that are supporting that bridge.

“The process and the exercise that I call ‘The Bridge’ is where you get to imagine that you have ninety days left to live. This process takes about six hours, usually in one-hour sessions, and it gives people the opportunity to take a deep-dive into the pillars: spiritual well-being, emotional well-being, physical well-being, practical well-being, and their life legacy,” says Khalsa.

The documentary examines what is being called an earth-friendly or ‘green burial.’

“So this is a subject that is really near and dear to my heart,” says Khalsa. “A ‘green burial,’ to put it simply, is really an opportunity to place a body in the ground in its most natural form—so that it can decompose, and it can in turn feed the soil and feed life once again.”

Khalsa continues: “There’s a couple elements that are required for green burial: one is elimination of embalming fluids, which are highly carcinogenic and dangerous to humans and the soil; number two is eliminating a casket that isn’t already naturally biodegradable—something simple like a sheet or a pinewood box is acceptable; and three is eliminating the vault liner, which is either a polyurethane or concrete liner that helps the graveyard look nice.”

We now know that cremation isn’t considered green burial, for a variety of reasons.

Khalsa says that “cremation, at one point, started becoming the popular choice for people—because it was more affordable, and people didn’t want to take up space in graveyards, so they believed it was the greener option. They said, ‘Oh, natural gas, that must be better for the environment than taking up actual room in graveyards.’ But what we’ve discovered is that natural gas isn’t as ‘natural’ as we think it is, and the amount of carbon released from cremation is actually very, very toxic, plus the heavy metals that get released from the body get released into the air. So it’s not as green of a practice as we once believed.”

This is Kate Collins, reporting for KDNK.

This story was produced for KDNK. 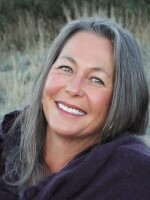 Kate Collins
Kate Collins is a marketing, communications and voiceover talent who has spent her entire adult life in the mountains of Colorado, seeking to make the income meet the expenses while passionately indulging her avocations in the big backyard of the central Rockies.
See stories by Kate Collins