Can A River Play The Violin? It Can With This Researcher's Help

Stand near a river and you’ll hear a symphony of sounds: birds chirping, frogs croaking and water flowing. But what would it sound like if the stream itself could be transformed into classical music?

David Merritt, a Colorado-based researcher and musician, is helping answer that question by turning river data into music to hear how we’ve changed rivers throughout the West.

Listen
Listening...
/
Luke Runyon reports on a researcher who's turning data into music. 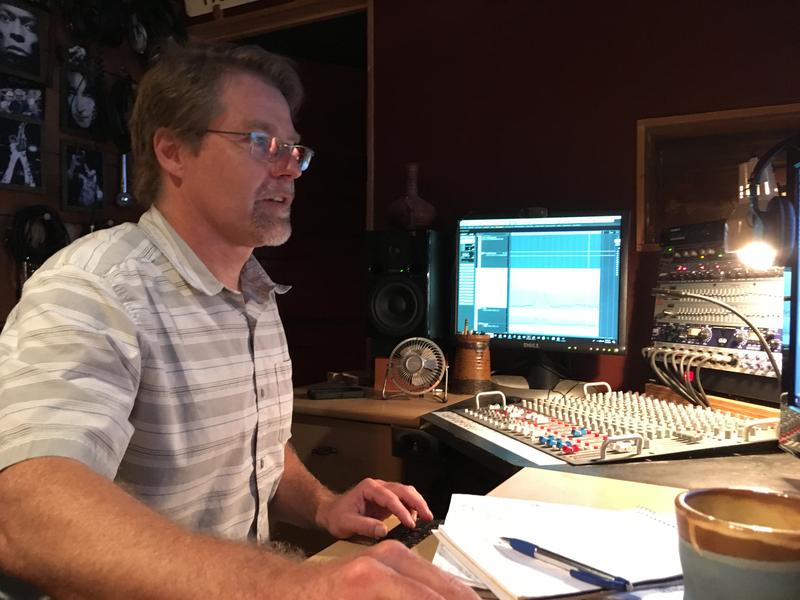 By day Merritt is a riparian ecologist for the U.S. Forest Service in Fort Collins. By night, he’s a musician. One evening, off the clock from his Forest Service duties, he was messing around with audio files in his basement recording studio.

At the time, he was frustrated. He knows rivers are important, but making other people care is hard. If people could feel the seasonal peaks and valleys in river flow they might be more likely to appreciate their benefits, he thought.

Using his background in both flow data and recording music, Merritt pulled up the annual average flow figures for his favorite river -- the Yampa in northwest Colorado -- and funneled it through a program that turns numbers into digital music. He wrote a piece of code to turn the data into notes that a computer can play using Musical Instrument Digital Interface, or MIDI.

“I absolutely got chills as I listened to the flood of 1984 in church organ,” Merritt says.

He called his wife down. Had her put on the headphones and hit play.

Listen
Listening...
/
Listen to the Yampa River during a 1984 flood played by an organ.

The high notes represent the river’s seasonal peak. Encumbered by only a handful of dams on its main channel, the Yampa's seasonal flow is dynamic, fed by snowmelt each spring. The year Merritt first played, 1984, was a record wet year in the Colorado River Basin.

Realizing he’d stumbled on a whole new way of experiencing data, Merritt started auditioning other rivers and trying out different instruments. When the rivers are low, the music is rhythmic and steady.

“I hear a heartbeat of violas and violins and piccolos and cellos,” he says. “And as a monsoon or a snowmelt hydrograph begins to form. You can hear other instruments picking up and you can hear the rate of the playing of these instruments speed up and vary.”

We’ve been measuring the flow of some Western rivers for more than a century, which Merritt says gives us the opportunity to hear how we’ve changed them. Take a river like the Green, which starts in Wyoming and snakes through Utah and Colorado. In 1962, the Green didn’t have any large dams. Its seasonal flow hit lots of highs and lows.

Listen
Listening...
/
Listen to the Green River in 1962 as orchestral music.

But just a few years later both the Fontenelle and Flaming Gorge dams were completed on the Green. Here’s how it sounded after that:

Listen
Listening...
/
Listen to the Green River in 1965, after the closure of Flaming Gorge Dam.

Flaming Gorge Dam is a key part of the Colorado River Storage Project. It allowed states in the Upper Basin of the Colorado River to hold on to more water, but it also dramatically changed ecosystems along the Green. Instead of the river reaching for the high notes each spring, the dam leveled it out. Flows corresponded more with demands for hydropower than with the needs of insects, birds and fish.

“This is what it sounds like under regulated conditions,” Merritt says. “It's undeniably different and it's undeniably had an effect on the organisms in those systems. And this is a way for you to hear it and and hopefully to feel it.”

For millennia rivers in the West surged seasonally, either from snowmelt or monsoon rains. The animal and plant life that call rivers home have evolved to be in sync with that rhythm.

“If we are aware of the consequences of damming and diverting a vast majority of the streams in the West then I think society could rally behind protecting one or two,” Merritt says.

Dave Merritt says he’s not naive to the fact that dams are part of what make life in the West possible. But now we have the ability to manage our existing dams better.

“Maintaining those vital components of flow regime that support those organisms is something that we can deliberately do and and probably do pretty well,” he says. “We would as a society benefit from being aware of that: Restoring some of the symphonic sounds of these rivers.”

Few rivers in the West are as free-flowing as the Yampa. Merritt says when you hear the river turned into music, it’s easier to recognize its unique character.

“It's something that we ought to treasure and protect like a piece of art or like a great symphony.”

Editor's note 7/26/18 1:07 p.m.: An earlier version of this story said the Yampa River was "one of the few rivers left in the West without significant dams or diversions on its main channel." The Yampa has one dam that forms Stagecoach Reservoir, and several dams on the Bear River, a key tributary near the river's headwaters.