As word came this week that yet another round of layoffs were planned for The Denver Post's newsroom, lawmakers at the Capitol worried about what the future would look like with less news. Among those concerned about the fate of news is Rep. Larry Liston, who for years has clipped articles from newspapers to keep track of what's going on.

Listen
Listening...
/
State lawmakers in both parties appeared shocked at news of the steep layoffs proposed at the Denver Post.

People these days, the Colorado Springs Republican said, admit to him that they generally don't keep up with the news.

“They kind of just go around in a fog," Liston said. "I hate to say that, but they don’t get news and what little they get is by drips and drabs from wherever they get it -- from a news blog, and it’s supposedly true because they heard it on the internet. Sad."

Back in 2007, The Denver Post's newsroom had more than 200 employees -- as well as the fierce competition of another large-circulation daily, the Rocky Mountain News. Rep. Dominique Jackson, D-Aurora, said that competition made her better-informed.

“I was able to sit there with both papers, and I’m a real newspaper person, and really dig into the issues,” Jackson said.  “I really miss those days.”

The News shut down in 2009 and, since then, the Post's newsroom has steadily declined. It will number about 60 news staffers after the latest round of cuts, a reduction of about a third. Post reporter Jesse Paul said the cuts will leave the newspaper with fewer boots on the ground to chase stories: about 20 reporters for all the news and institutions in the state.

“I’ve been here for four years and I’ve gone through at least four rounds of staffing reductions, and this one is just by far the most painful,” Paul said. “Seeing what this is going to do to The Denver Post, I just can’t even put into words how much less we’re going to be able to do.” He’s one of three Post reporters based at the Capitol, the largest contingent of any news organization in Colorado. The Post is also the only media outlet in the state that has a reporter based in Washington D.C., who looks out for issues relevant to Coloradans.

The Post isn't alone in its newsroom decline. Layoffs are taking place at newspapers across the country. One long-time culprit is a decline in print advertising dollars amid changing strategies to bring in more digital revenue. DenverPost.com recently added a paywall that requires people to pay for access to articles. 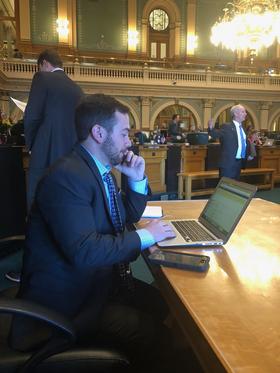 “Even if it’s part of a trend, it’s especially severe, I think, both in terms of the cuts just announced, and trying to run a paper for a metro the size of Denver on that small staff,” said Rick Edmonds, a media business analyst for the Poynter Institute.

Edmonds added that the Post's total news staff would be less than half the size of some newspapers in similar markets.

Staff members have until March 21 to voluntarily leave or layoffs will be announced by managers. Many at the newspaper are already searching for other jobs, some outside of journalism altogether.

“Personally it’s very devastating, but also I’m more sad that -- just the state of journalism that I have idolized my whole life,” said Post breaking news reporter Elizabeth Hernandez. “All I’ve ever wanted to do is just being destroyed in front of me.”

She’s 25 and was already laid off once by the Post in 2016 then re-hired three weeks ago. She expects to soon be out of a job again.

The Post's parent company, Digital First Media, is owned by New York-based hedge fund Alden Capital. While the privately owned company doesn’t have to reveal financial data, reporters said they’ve been told the newspaper is profitable, but that it’s not reaching financial targets.

“I’m disappointed that a hedge fund is going to prioritize their own profits over the public service that newspapers are,” said House Majority Leader KC Becker, D-Boulder. “We’re always talking about newspapers being the fourth estate. It’s a real loss for people.”

One lawmaker joked, ”Hey that means we can do whatever we want" -- because fewer of the newspaper's resources may go to the watchdog role of covering lawmakers at the Capitol.

Other lawmakers grumbled about the layoffs, noting that their bills don’t get enough coverage as it is and expressed disappointment at how little the public knows about what happens at the Capitol.

“We may not always agree with what a particular reporter writes or says, but that’s part of the way our system has worked, and worked very, very well for a long time,” said Assistant Minority Leader Cole Wist, R-Centennial. “So I welcome the scrutiny. I welcome the discussion because at the end of the day our process is better when we have a broad discussion about the work that we do here. Journalists bring a different perspective to the issues and we need that.”

The Denver Post will cut 25 positions by April 9 and five more by July 1. Those that remain at the newspaper may have to switch what they cover or how they cover it. They’ll also have to brace for the possibility that these cuts won’t be the last.