A Colorado Springs man has been living at All Souls Unitarian Universalist Church for the past week to avoid deportation back to his home country of El Salvador.

His lawyer said the ongoing government shutdown has stymied efforts to appeal a deportation order.

Miguel Ramirez Valiente came to the United States from El Salvador 14 years ago. He is married to a U.S. citizen, with whom he has three children. At a press conference Wednesday, he told reporters that he left El Salvador -- where he was studying to be a lawyer -- due to gang violence. He said he fears for his safety should he be forced to return to the Central American country.

Speaking through an interpreter, Ramirez Valiente said he’s been fighting deportation since 2011, when he was pulled over for a traffic violation in Castle Rock and turned over to immigration authorities. In 2015, he said his circumstances changed when he was assaulted while working as a stonemason. That made him eligible for a U-visa, which are set aside for victims of violent crimes who cooperate with law enforcement. Ramirez Valiente applied for the U-visa, and he said his deportation case was administratively closed in 2017 pending the consideration of his visa application. 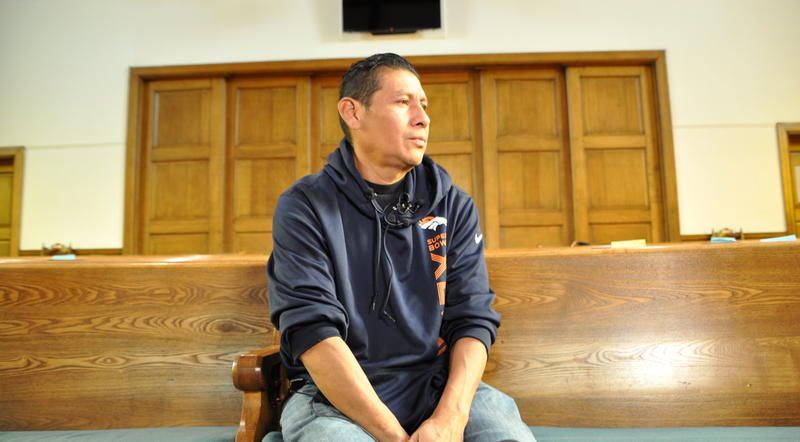 Ramirez Valiente said he missed his court date, and he received an order to present for deportation on January 3.

“My wife read it, it was in English, and immediately started crying,” he said through an interpreter.

His lawyer, Lisa Guerra, filed a motion to reopen his case, but she said the government shutdown has meant that there is no one to review the motion.

“I’m not sure what happened with the motion to reopen, it’s probably sitting in the mailroom with a million other motions that have been filed during the government shutdown,” said Guerra. “We are in, basically, legal limbo, waiting for the government to reopen.”

In the meantime, Ramirez Valiente is living in a makeshift bedroom at All Souls Unitarian Universalist Church in downtown Colorado Springs, protected by the principle of “sanctuary.”

“Traditionally, Department of Homeland Security or ICE do not come into the churches and remove people from the churches,” explained Guerra.

“We believe in the inherent worth and dignity of every human,” said Rost. “In this case, it means no human being is illegal, and it is incumbent upon us to provide sanctuary for those who are being needlessly routed from our country, where they have lived long and are parts of their community.”

Since 2017, All Souls Unitarian has been a member of the Colorado Springs Sanctuary Coalition, a group of churches and community activists that includes First Congregational Church and Friends Meeting Quaker congregation, which has pledged to provide sanctuary to people facing deportation in Colorado Springs.

In the summer of 2017, All Souls Unitarian took in another immigrant and his son, who stayed at the church for several months.

Rost said she hopes that, beyond providing a refuge for immigrants in need, her church can help educate the broader public by taking in and publicizing the stories of people like Ramirez Valiente.

For his part, Ramirez Valiente said he’s grateful to have a place to stay while he waits for the government to reopen. “I thank God that I’m still united with my family,” he said.

But he said he’s frustrated that the government shutdown has prevented him from making his case to the courts.

“I believe that if the government were open, I wouldn’t have to be here,” he said. “It’s been difficult for my family, my girls are in one place, I’m here. I can’t work. My wife is the only one who’s working right now.”

Representatives of Immigration and Customs Enforcement, or ICE, could not be reached for this story due to the ongoing government shutdown.

Sandra Lopez has lived in the valley for twenty years but for the last nine months she has had to live in sanctuary to avoid deportation. Sandra and her son, Alex, describe how living in sanctuary has affected their family.

When Sandra Lopez entered sanctuary in October of 2017, local photojournalist Laurel Smith committed to document her story. For this week’s News Brief, she shares with KDNK’s Raleigh Burleigh about the experience. More information about the People’s Resolution is available here.