A warm spring has already melted much of the limited snowpack that sits high in the Sangre de Cristo mountains in southern Colorado. Water is already flowing through the ditches near the rural village of San Pablo.

It’s 9 a.m. on a windy Saturday morning. Every now and then Dan Quintana -- in weathered work gloves and a ball cap -- raises up his shovel and slams it into the mud and matted willows that line the waterway that runs through his hay fields. His slight frame makes it easy for him to jump across the narrow ditch.

“All these get flood irrigated,” Quintana explains. “That's how everybody irrigates their properties.”

For many people, spring is a time for deep cleaning, a time to take stock of and prepare for the year ahead. That’s also the case on farms in southern Colorado and northern New Mexico, where farmers spend their weekends banding together to clean out the irrigation ditches that bring snowmelt to their fields.

The clean up, known as the limpieza, is part of an irrigation tradition unique to this region for centuries.

If you irrigate here, Quintana says, you or one of your family members is expected to be here shoveling out muck, removing trash and tree limbs. The limpieza is an annual obligation.

“[We make] sure there's no obstructions in the ditch that prevent the water flow for the users downstream,” Quintana says. 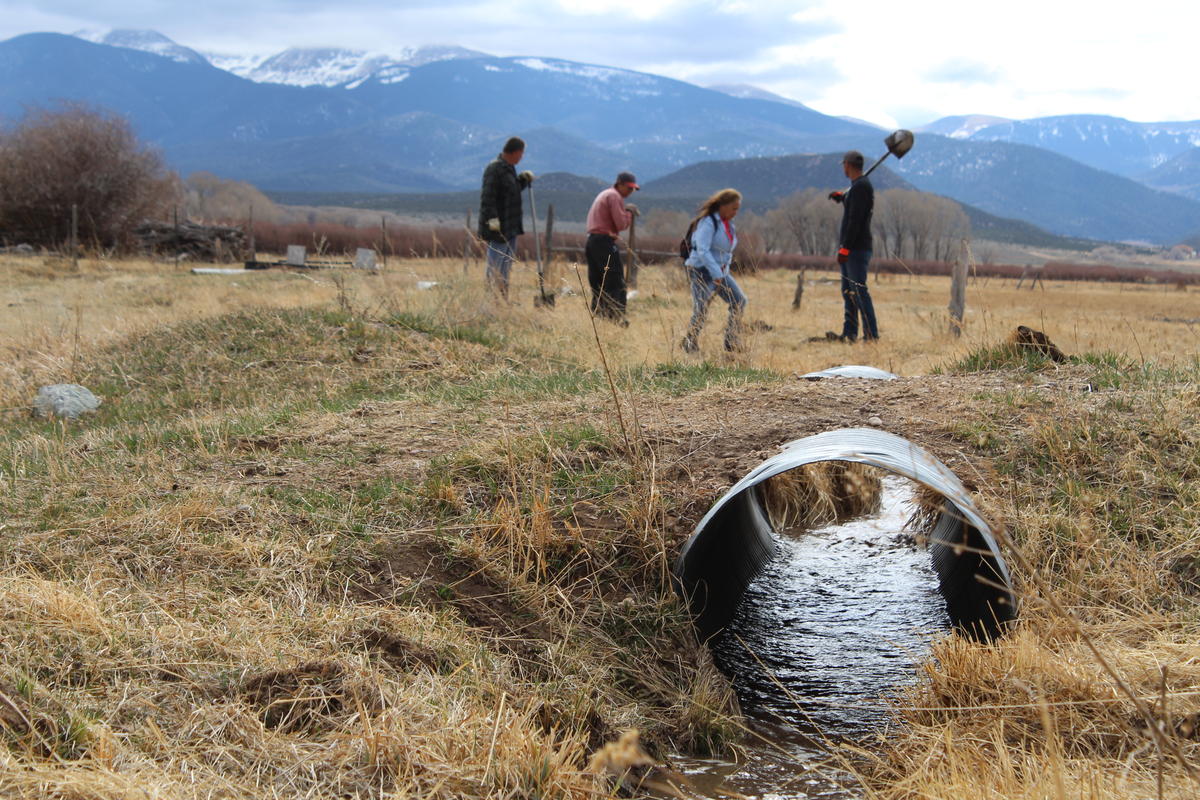 If not for the clean up, water would pool in places it’s not needed, caught up in makeshift dams of trash and vegetation.

Small farm towns in portions of the San Luis Valley, like San Pablo, are organized around acequias, networks of irrigation ditches and canals dug nearly 150 years ago. It’s what makes farming possible in this dry stretch of land. While most Western law views water as property - a commodity people own and trade - acequias see it as a community asset, something tied to the land and shared.

Quintana, 61, grew up on a farm in San Pablo. As an adult, he left for a career in IT, always knowing his family’s land would be here for him to return to. He participates in the annual ditch cleaning now because he always has. But Quintana says there’s a growing sense that it will be difficult to bring the next generation back to the valley to keep the acequias functional and vibrant.

“There's no dollars,” he says. “There's no ready dollars for them to put in their pocket. So they go after seeking jobs in the cities. Some come back. Most don't.” 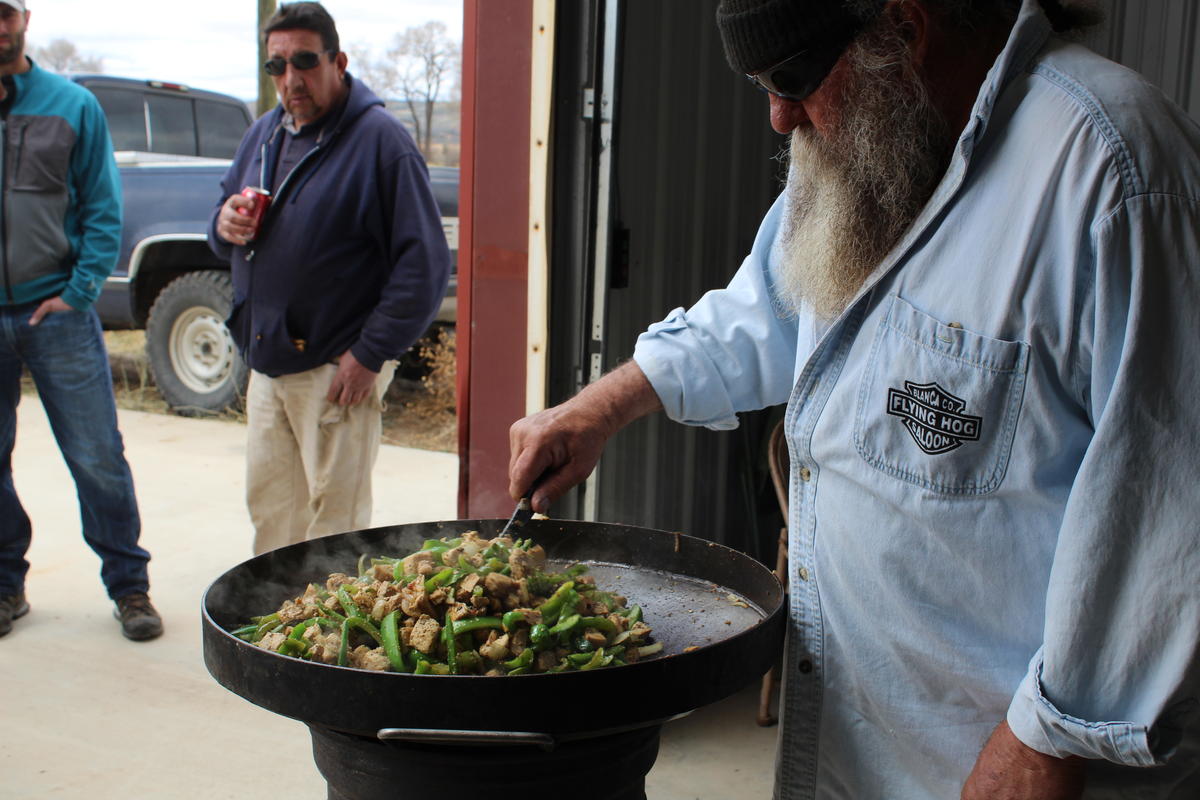 Sharing water in the West

On this day, the limpieza moves fast. The ditch is cleaned, and a group of middle-aged farmers pile into the back of an old pickup truck to head to the volunteer fire station for chicken fajitas.

It’s hard to overstate how radical the idea of sharing water in the West is. Everyone outside an acequia in states like Colorado, Utah, Arizona and Nevada, uses the prior appropriation system for water. That system, where your right to water is given to you based on when you claimed it, doesn’t allow for easy sharing, but it’s the core tenant of acequia management. Distribution of water is based on equity and need, not given out because you claimed it first.

Sharing water sounds easy if snowpack is high and runoff is plentiful. But in times of scarcity everyone within an acequia feels the shortage together.

Acequias vary in their style of governance. A common form is as a civic association, with members, the people who irrigate with water from a particular ditch, a board of directors and at least one employee who runs the ditch. That person is the mayordomo. 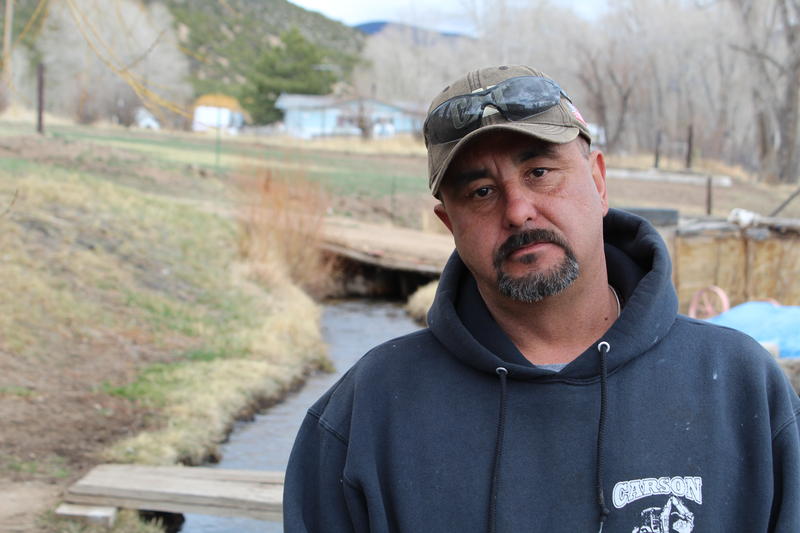 Augustin “Roy” Esquibel is the mayordomo for the ditch cleaned today. When he arrives at the fire station for lunch, he takes the time to shake everyone’s hand, and jokes that he’ll have to walk a lot more ditches to work off these fajitas.

He motions down the street, toward the church of San Isidro, the Catholic saint of farmers. This valley is sustained by agriculture, he says. Everyone here is either currently farming or a descendent of farmers. The land today is used to mostly grow hay or other grasses for cattle and horses, with some wheat and dry beans grown as well. As a water steward, Esquibel says his faith guides his decisions.

“Just be neighborly and treat people the way you'd want to be treated,” he says. “We've lost a lot of that. That's just gone by the wayside. It's all about, ‘Me, me, me. What's in it for me?’ And I think over here we still care about each other, about the community.”

While the water management here is unique, these towns also experience many of the same challenges as other rural areas across the country - like poverty, farmland consolidation and limited educational opportunities. All of which are causing young people to leave, Esquibel says.

“We all want the best for our kids. So we want to educate them, send ‘em out, make some money,” he says. “But they never came back. And it’s heartbreaking.” 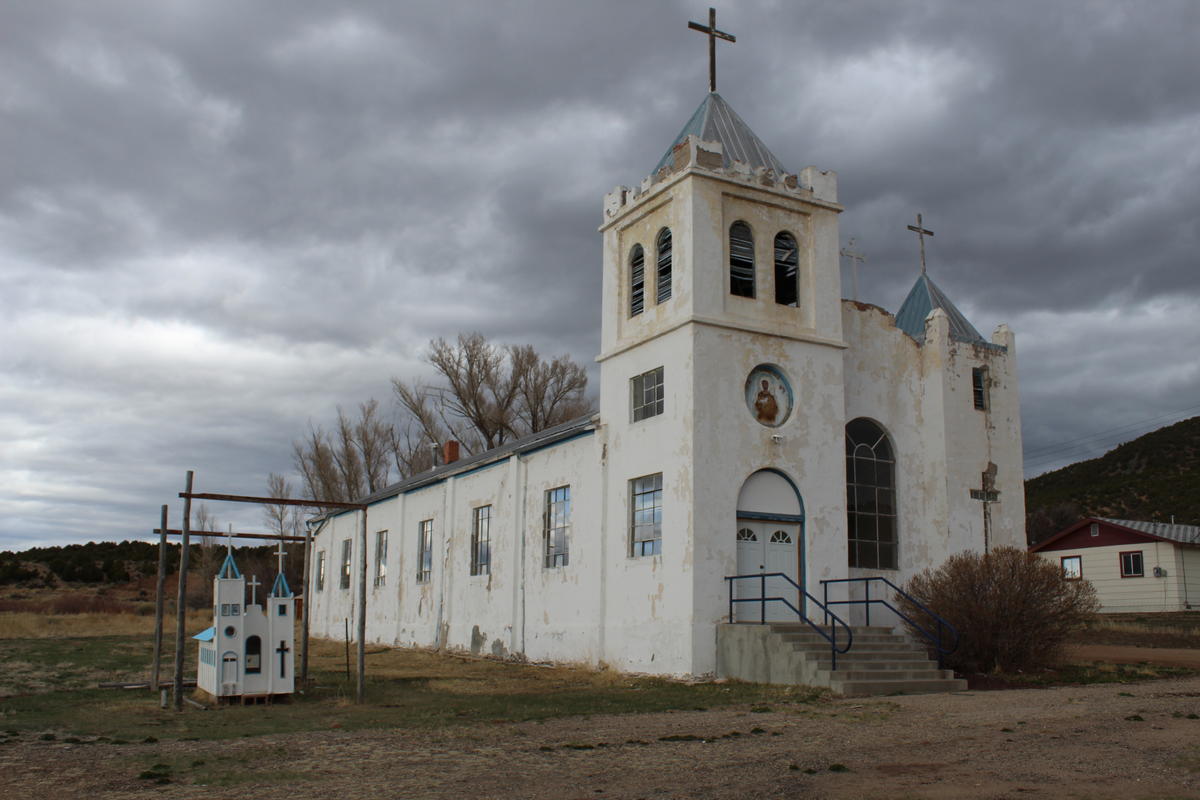 “What kind of people do we become?”

After lunch, a group of teenagers gather around a fire pit in Junita Martinez’s backyard in the community of San Francisco, about a 10-minute drive from the fire station.

“We're actually sitting right next to a babbling stream and it's our acequia,” Martinez says. 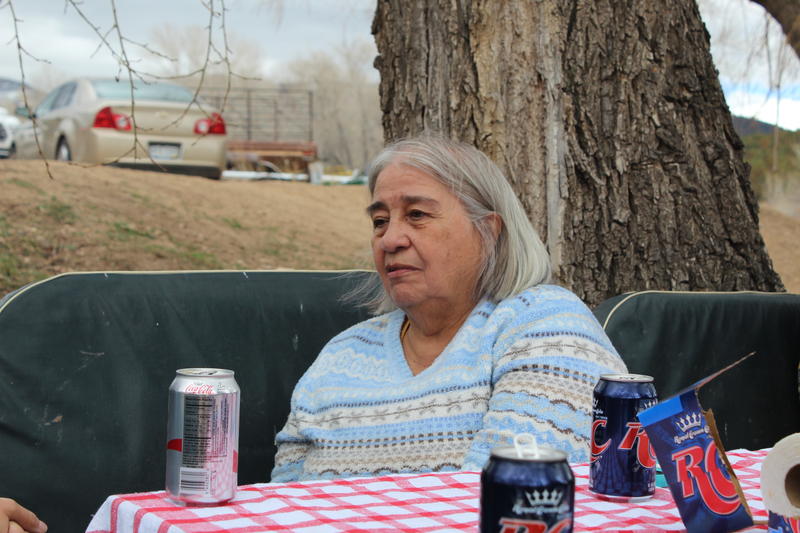 Martinez is quick to crack a smile. She’s a leader in the community and also active in an acequia association in the valley.

“It makes you think about who you are as a person, your values. Are you a good neighbor? Do you trust people? Do you value people?” she says.

More and more of the farmland here is owned and operated by absentee owners, she says. And that means it’s hard to fill board positions within the acequia. Those landowners often don’t participate in the limpieza, nor send a family member in their stead. Many acequias assess a fee if you’re not willing to participate. But with fewer participants, the work takes longer and creates a rift within the community, Martinez says.

“Oh god, it kills me,” she says. “And the reason why is because what then? What kind of people do we become?”

Shirley Romero Otero echoes that concern. She oversees a youth group in the town of San Luis called Move Mountains, intent on weaving young people into the community’s traditions, like ditch cleaning.

“As a community activist, as an educator, I'm extremely concerned about the next generation not being able to carry these traditions,” Otero says. 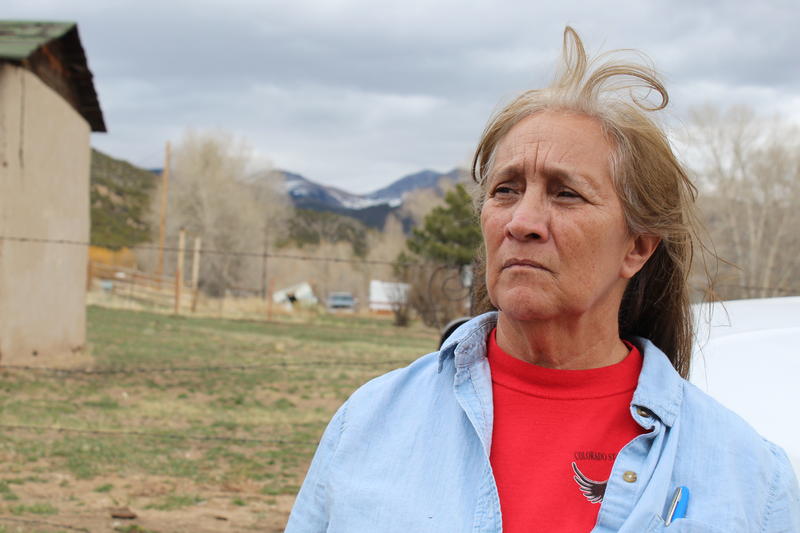 Otero says the acequias are more than just a way of managing water. They’re a more democratic way of managing and dividing up scarce resources, which create a culture around them. People within the acequia feel more empowered about decisions related to water management, she says.

That style of community decision-making has all kinds of applications outside the acequia, outside the farming communities that rely on the water, says Otero.

“The key to this is to teach the kids: This is who you are. This is the community that formed you. This is your culture. This is the way you think, feel and act,” she says.

Eight young people currently live in the village of San Francisco, and like other small town kids, they’re often counting the days until they can go off to college or find a job. That’s why Otero makes sure they know why sharing water within an acequia is unique even if they leave.

“If we can instill that in the hearts and the minds of young people they will always come back and give to their community,” she says. “I've seen it over and over again.” 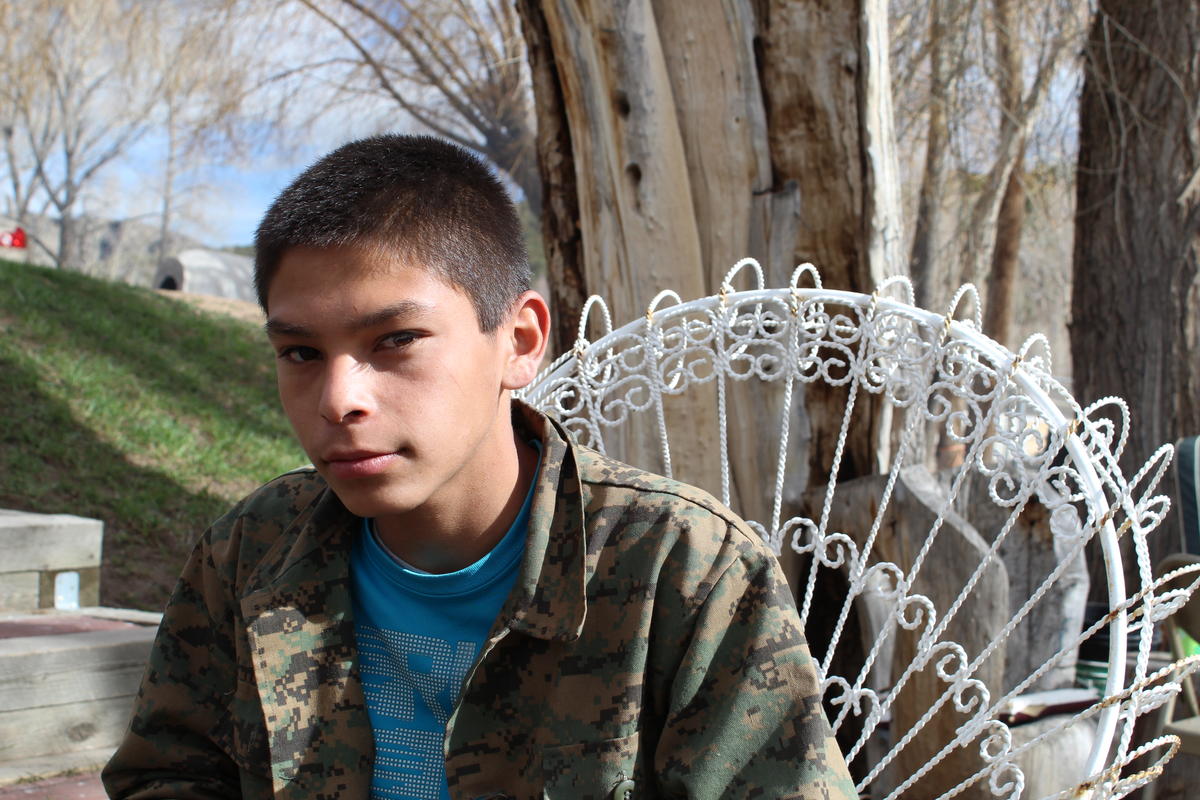 Bringing in the next generation

Sitting by the ditch in San Francisco in a camouflage jacket and sporting a buzz cut, 14-year-old Leon Medina digs through a box of arrowheads he’s found in the nearby mountains.

“My hobby is looking for horns and finding arrowheads. These are nice, that’s just a spearhead that my cousin had found,” he says as he move a carved obsidian point between his fingers.

Medina is in the youth group run by Shirley Romero Otero. He and his friends got together to help with today’s limpieza, moving the work along faster, turning a day long chore into one wrapped up in the morning. Medina says when he grows up he’s interested in becoming a game warden in the nearby mountains, to keep track of wildlife and prevent poachers. Growing up here, he’s mapped the Sangre de Cristos in his mind.

“You can see the rings around the trees where the water has been high,” he says, pointing to trees that line the ditch, “but now it's gone lower. You can tell it's going to be a drought.”

That fact, that the snow was lower this year than almost any other in the records we’ve kept, is why the ditch cleaning takes on a different kind of urgency for Medina. Every drop of water will be even more valuable to the farmers, he says, like his dad.

“He's had me irrigating his fields since I was like seven years old,” he says. “So a lot of people like all these old timers asked me if I could help them.”

He says friends at school will often complain about being bored, and how they can’t wait to leave. But Medina says he wants to live here. He has an interest in how the acequias work, how to irrigate land, and how to build a community.

His voice trails off and he gestures up toward the Sangre de Cristo mountains and then back down toward the acequia and the water flowing at our feet. And while he does spend time outside the valley, he says he’s always happy to come home.

This story is part of a project covering the Colorado River, produced by KUNC for public media stations throughout the southwest, and supported through a Walton Family Foundation grant. KUNC is solely responsible for its editorial content.