Western Snowpack Is Low. How Worried Should We Be?

This winter in the southern Rocky Mountains is shaping up to be one for the record books. And not in a good way.

Parts of the West are currently experiencing one of the driest and warmest winters on record. Snowpack is far below normal levels in southern Colorado, New Mexico, Arizona, Utah and California, leaving some to worry about this year’s water supply. 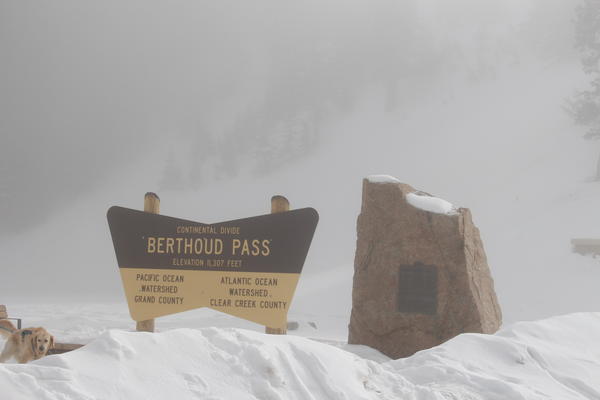 To get a sense of this year’s snowpack, head to a place like Berthoud Pass, an hour drive into the mountains west of Denver. The pass, which straddles the basins for both the Colorado and the South Platte rivers, is home to a SNOTEL site. SNOTEL -- a portmanteau of "snow" and "telemetry" -- is the system of hundreds of snow measurement sites throughout the Western U.S. that estimate the amount of water held in mountain snowpack.

The site is a short snowshoe hike up a hill off the highway, in a small clearing in the trees. The Berthoud Pass site was set up in the first generation of SNOTEL sites dating back to the late 1970s.

“This is at the higher range of where we do measure snow,” says Karl Wetlaufer, the assistant snow survey supervisor for the Natural Resources Conservation Service in Denver. “We’re well over 11,000 feet here.”

Each SNOTEL site is a Rube Goldberg setup of meters and tubes designed to measure the weight of the snow. When snow falls it compresses pillows on the ground, filled with a sweet-smelling liquid anti-freeze. The liquid is displaced by the snow’s weight, and from the weight scientists can figure out the most important aspect of mountain snowpack: how much water is in it. The process is mostly automated, but the sites still require maintenance. 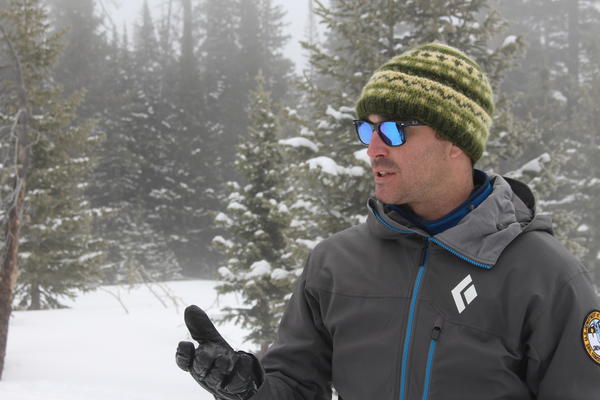 “There’s kind of some elegance in the simplicity. We’re literally just weighing the snowpack, second hand,” Wetlaufer says. “And that’s the most accurate way to get the water content.”

It’s meant to give a glimpse at how the winter is shaping up so cities, farmers and water managers all throughout the West can plan. So far, this year’s prognosis is bad.

“Just driving up through the mountains as we gain elevation there’s definitely noticeably less snowpack than we would expect as we approach the site,” Wetlaufer says. “And intuitively you can just feel that we have a lower snowpack.”

That’s even worse news considering Berthoud Pass -- currently at 80 percent of average -- is one of the better sites for snowpack in the entire Colorado River watershed, which supplies water for about 40 million people in seven states.

“The hole we’re in now in terms of the snow deficit is going to be really hard to pull out of,” says Jeff Lukas, who studies long-term climate shifts at the Western Water Assessment, based at the University of Colorado-Boulder. 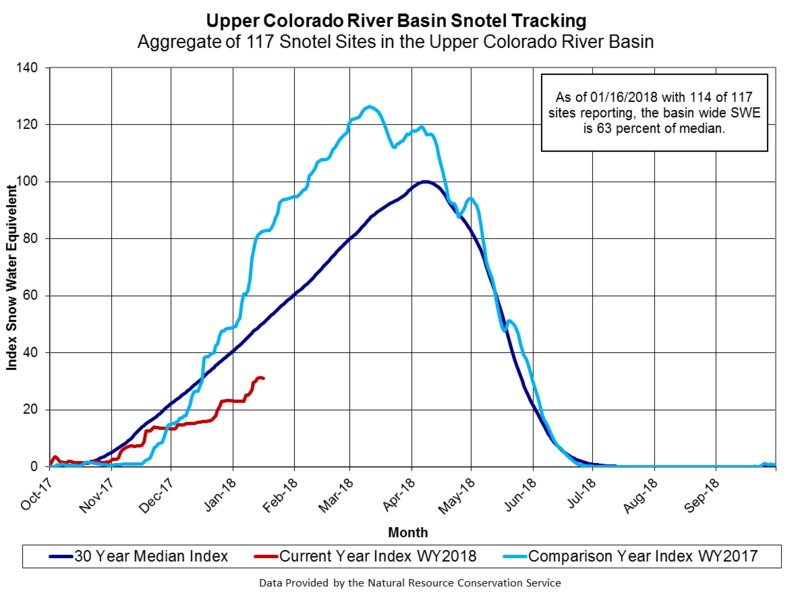 If you add up the numbers at all the SNOTEL sites in the upper Colorado River, snowpack is at 63 percent of average. It’s well below normal, halfway through the snow accumulation season. Essentially, time is running out to make up that deficit, Lukas say.

If the weather stays dry and warm through the spring, Lukas says it’ll set the stage for the rest of the year.

“You have vegetation growing and drying out and curing earlier,” he says. “You’re setting yourself up for a worse than average wildfire season.”

Forecasts for river flows by the Colorado Basin River Forecast Center are already taking the current diminished snowpack into account. Most streams are projected to be lower this spring, some just slightly, with others extremely below average. Inflow to Lake Powell, the first major reservoir the Colorado River empties into on the Utah-Arizona border, is projected to be 54 percent of average this spring and early summer.

The good news for upstream water managers is that most smaller reservoirs in Colorado, Utah and Wyoming are storing above average amounts of water, boosted by drought-busting wet weather in the winter of 2016-2017.

“We can weather one bad year,” Lukas says. “But in other parts of the West or even downstream in the Colorado River Basin, Lakes Powell and Mead are both sitting well below capacity.”

“But overall that’s very bad company for us to be keeping,” he says. “Those years turned out to be -- all of them were quite a bit drier than average. And three of the four were in the bottom six or seven years of the last 50.” 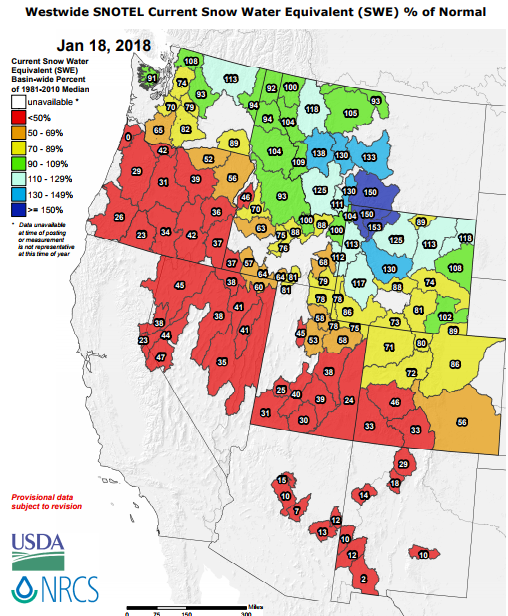 All that bad snowpack news means downstream states like Arizona, Nevada and California are anxiously looking toward the Rocky Mountains. The Colorado River -- fed by snowmelt -- provides roughly 40 percent of the Arizona’s water.

“We closely watch this. We know how important it is,” says Tom Buschatzke, director of the Arizona Department of Water Resources. “It’s a huge piece of Arizona’s water budget, and a life blood for the state.”

Of all the states that rely on the Colorado River’s water, Arizona is in arguably the worst position to handle a dry year. Its reservoirs are currently sitting below average, yet to recover from a long-term drought that’s plagued the southwest for more than a decade.

On a scale of zero to 10 -- where zero is not worried at all and 10 is panic mode -- Buschatzke says he’s moderately worried about the state’s ability to withstand a dry winter.

“I am probably at about a seven right now,” he says.

Add in the projections for climate change that show a future where the river’s supply is sapped even further, and thinking about the river’s future can be anxiety-inducing.

“Most nights it does not keep me up. There’s an occasional night where it does,” Buschatzke says. 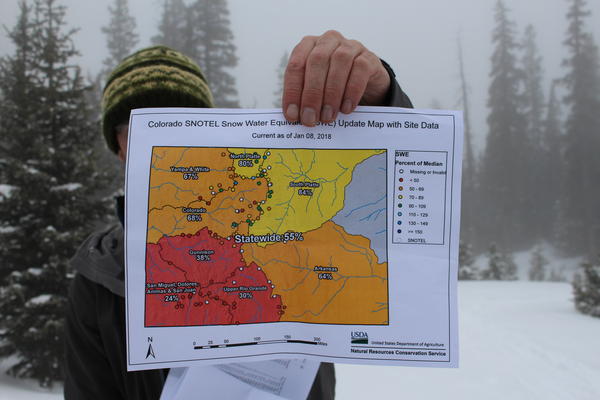 Back at Berthoud Pass, snow surveyor Karl Wetlaufer writes down measurements, using an aluminum tube to take core samples from the snowpack, and then weighing it. This more old-school method of measurement is still in use by surveyors across the West.

Wetlaufer isn’t panicking yet. There’s still plenty of winter ahead of us. It wouldn’t be unprecedented for some big storms to change everything. But the window for those Hail Mary snow storms is closing, he says.

“With every week that goes by the probability of reaching a normal snowpack is less and less really,” he says.

That probability is lessened even further by the current long-term weather forecasts. They’re showing a likely chance of higher temperatures and lower precipitation this spring in mountainous regions that need exactly the opposite.