Windy Gap Puts Collaboration On Water To The Test

In poll after poll, Americans make it clear: People working together is a good thing.

Collaboration is a lofty goal touted by political and business leaders as a potential way forward on anything from climate change to healthcare to obesity. Drop your weapons, turn your enemies into partners and achieve great things — or so the thinking goes. But collaboration is a concept that sounds great in the abstract and quickly turns messy in practice, with plenty of pitfalls along the way toward a common goal.

Avoiding drawn out fights has always been tough when dealing with water issues in the West.  Collaboration wasn’t always the go-to strategy for environmentalists, political figures and water managers who held competing interests on overtaxed, overdrawn rivers.

But with the Windy Gap Firming Project in northern Colorado’s mountains, old grudges are being put aside in favor of new, collaborative tactics. While some of the West’s oldest enemies are working together, those who feel left behind by all the newfound teamwork aren’t ready to sing "Kumbaya."

The Windy Gap Firming Project is a series of proposed fixes and upgrades to reservoirs and water pipes that straddle the Continental Divide. It involves the construction of a new reservoir, Chimney Hollow, outside Loveland to store West Slope water for use by 13 Front Range fast-growing water suppliers like Longmont, Greeley, Louisville and Broomfield.

The project, coupled with Denver Water's proposal to take more water from Grand County’s Fraser River through the Moffat Tunnel, has divided environmentalists on which approach to take with powerful water managers: collaboration or conflict.

Windy Gap Reservoir — at the heart of the dispute —  is a shallow, human-made lake just west of Rocky Mountain National Park. Colorado River water sits in a wide, shallow pool, kept in place by a dam. 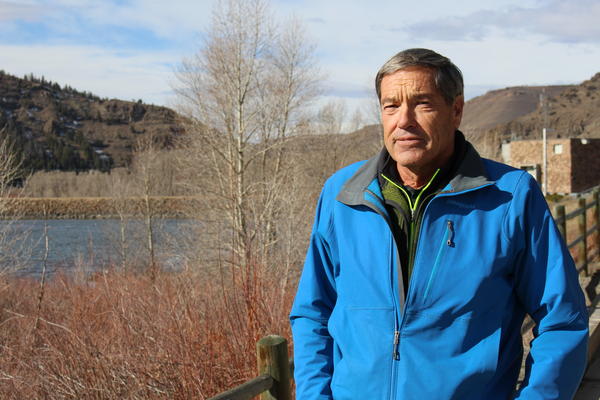 “All those western winds hit those two big mountain ranges and it just gets pushed through that gap,” Klancke says.

“This reservoir is named after that gap: Windy Gap Reservoir.”

It’s just one piece of a much larger diversion project that moves water from the headwaters of the Colorado through the mountains for use along the Front Range. Water managers have proposed, and received the federal permits needed, to use this small reservoir to move more water eastward, exercising water rights they say they’re unable to use now because the system is full to the brim at inopportune times.

That type of proposal -- to send more Colorado River water eastward to supplement urban and suburban growth -- stirs up all kinds of West Slope anxiety about Front Range growth.

“We know the flows are going to be diverted,” Klancke says. “We know the state’s not going to stop growing, that’s reality.”

Klancke lives in Grand County, arguably the area of Colorado most impacted by water diversions. In general, he’s not a big fan of dams. But in the last decade or so, Klancke has had a change of heart.

“The pragmatic approach would be then to figure out how to keep your aquatic habitat healthy with those diminished flows, and that’s what we’re doing,” he says.

Rather than fight powerful water managers like Denver Water and Northern Water in the duke-it-out, courtroom-style battle some environmental groups have perfected over the years, Trout Unlimited and some of its allies took an unprecedented step: working together. Since the Windy Gap project’s revival more than a decade ago, they’ve had a seat at the negotiating table. If cities want to siphon away West Slope water, Klancke says, they need to give something in return.

“These are some of the most powerful people in the state because they control one of the state’s most important resources,” he says.

Which is exactly why other environmentalists, like Ken Fucik, don’t trust the water diverters and, by association, environmental groups like Trout Unlimited for working with them.

“When you look at the process over here, there are some of us over here who are unhappy,” Fucik says. 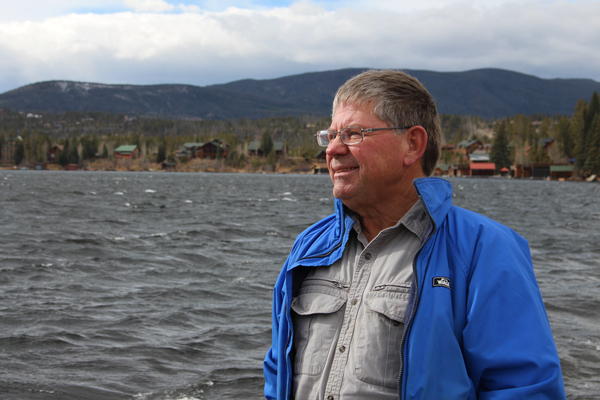 Fucik, a retired environmental consultant from Grand Lake, is opposed to a 2012 deal brokered by Trout Unlimited, county officials and others. In exchange for a permit to allow more water be sent to the Front Range as part of Windy Gap, the negotiators got $10 million in required mitigation to upgrade water quality in the headwaters and an additional $12 million in mitigation work for fish and wildlife, projects not required by law. That includes partial funding for a bypass channel that would skirt around Windy Gap dam and reservoir, reconnecting the upper reaches of the Colorado River, allowing fish to move more freely.

Grand County was also able to negotiate additional flows out of Windy Gap Dam to flush out sediment, an agreement that Northern Water be in charge of operation of the new bypass and more flows to support endangered fish in a stretch of the Colorado near Grand Junction.

Despite all that, Fucik says Grand County got short-changed.

“I’ve worked projects all over the world, where you had to work and you had to collaborate. But it’s a two-way street,” he says. “Where’s the meeting in the middle?”

Fucik says, given the amount of money Front Range water providers will gain with the additional water, $12 million in river enhancements from the Windy Gap project are a drop in the bucket.

“I’m supposed to sign on because they’re throwing me a penny and a poke? No way.”

Environmental consultant Geoff Elliott agrees. He lives in Grand County and says when you’re not part of collaborative agreements and weren’t invited to the negotiations, you end up feeling left out and unheard.

“It comes down to trust and we’re asked to trust in a process where we’ve been eliminated, pushed out and punished,” he says. “It’s hard for us to trust in that process.”

Fucik and Elliott are now supporting a recently filed lawsuit from a handful of environmental groups who take a different tactic with water projects, like Save The Colorado and WildEarth Guardians. Their goal is to prevent more water pulled from the Colorado River watershed from traveling to the Front Range.

“This is just bad water policy,” says Gary Wockner, Save The Colorado’s director. “Continuing to drain rivers to try to serve water to growing cities on the Front Range is just a 19th century idea for crying out loud.”

For an environmentalist concerned about the health of the river, this conundrum has become the fork in the road: When do you collaborate with someone who’s supposed to be your enemy? And when do you roll the dice in court? 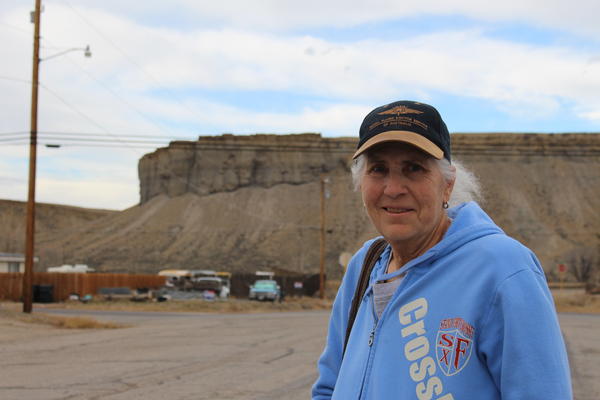 Lurline Underbrink Curran says the path of most resistance has been tried before, with pretty erratic results. She’s the former Grand County manager and sat at the negotiating table with Northern Water.

“I don’t understand collaboration becoming a dirty word,” she says. “Because I can tell you, I can throw out some dirty words that will curl your hair, and that is not one of them.”

Because Grand County officials, like Curran, held the key to a permit that would allow the project to move forward, she joined forces with environmental groups like Trout Unlimited and ranchers concerned about the river’s flow downstream of Windy Gap. The negotiations took years and Curran says her team was a formidable opponent to the Front Range water suppliers, despite what detractors might think.

“It’s like they feel like we collaborated and folded,” she says. “We folded, and we just let these big entities roll over us and we’re just using the word collaboration to discount what really happened to us.”

Curran admits some of the negotiations were done behind closed doors, as she says, to build trust among old enemies. But adds that the solutions they came up with will benefit the river in the long-term.

“Will the Colorado be as wide and deep as it used to be? Hell no. But that’s gone. Like it or not that’s been gone for decades,” she says. “But you can make it so it’s functional.” 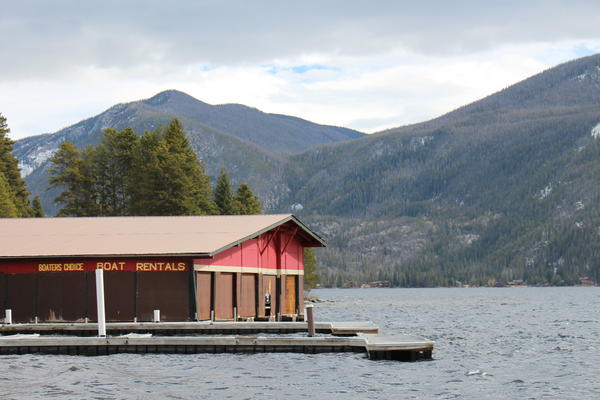 The idea of bringing parties with old grudges to the negotiating table was meant to avoid lawsuits in the first place. Now that one’s been filed it threatens to bring down the whole deal. Northern Water has already started planning the $400 million Chimney Hollow Reservoir. Trout Unlimited is still fundraising to secure enough money to build the Windy Gap bypass channel, the crown jewel of the agreement.

Northern Water spokesman Brian Werner says the agency is moving ahead with its plans.

“I’d be lying if I said there weren’t any concerns, we’d rather not have a lawsuit filed,” Werner says.

Werner doesn’t have any regrets on how the compromise went down. For decades, water managers have been seen as bullies who strong arm their opponents to get what they want. He says the Windy Gap Bypass project seemed like a turning point.

“What’s best for the river?” he asks. “We need water for growth in Colorado, there’s no question about that. How are we going to do it, folks?”

Either by working with your enemies. Or against them.

[Editor’s Note: This story was updated on November 16 to clarify that both Colorado Trout Unlimited and KUNC receive funding from the Walton Family Foundation.]