Ryan Roberts from The Knowbodies

Ryan Roberts played live on Pay it Forward on September 19th. Ryan plays in a local Ska band "The Knowbodies." They play  The Black Nugget on Fri., October 8th.

Ryan has lived in Africa, Britain, and France. Ryan plays the harmonica, guitar, banjo, and percussion. Mostly all at once. A one man band when not rocking out with his band. Ryan is deep and played some Irish pub styled music and says he is inspired here in our valley because of the access to culture we hold here in our area. 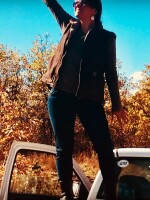 Kenna Crampton
Kenna has been a DJ on KDNK for 9 years. She grew up at KDNK as her mom Flash has been a DJ since 1983. She is happy to transition into Membership Director while keeping her show "Flyin' the Coop" alternating with her mom, Fridays 10-12 and her new Public Affairs show Chemical World, every second Monday of the month 4:30pm. Kenna is adding Volunteer and Events Coordinator to her title, and looks forward to continuing her relationship with the community she grew up in!
See stories by Kenna Crampton
Related Content