Get Lit Launches With Cocktails and Dystopian Novels

KDNK is starting a new show about books and authors. Get Lit can be heard on the second Monday of each month. It's hosted by KDNK Development Director Erin Galbreath and DJ April Spaulding. On the first installment, Erin and April make cocktails and talk about The Girl With All the Gifts, by M.R. Carey. It's a science-fiction novel published in June 2014 and written alongside the screenplay for the 2016 film of the same name. The book tells the story of a dystopian future where most of humanity has been wiped out by a fungal infection. 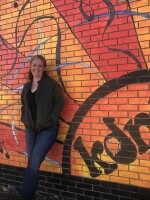 Erin Galbreath
Erin Galbreath moved to the valley after 10 years on the front range. She attended the University of Iowa and earned a bachelor's degree in Journalism and Studio art with an emphasis in photography. She also has a certificate in nonprofit management and has worked for several years experience in the nonprofit field. She loves hiking, camping and being in the mountains. She also loves traveling the world and attending live music shows.
See stories by Erin Galbreath