Paper Bird soared through KDNK's Beyond Beyond, landed, warbled, answered a question, warbled again, and then took off for Basalt's Lions Park where they sang in harmony for an appreciative crowd on August 25th. While they were here we played the first single from their upcoming release, produced by valley resident John Oates. Then they played "Sleepwalker" and "Make You Mine" live in the studio. Then some crazy song about Turkey Gum that was 4:20 long ushered them away and gone. 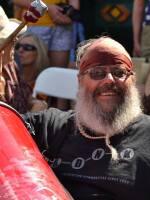