Colorado State Patrol, Colorado Springs Police Department, and the Sheriff's Office all responded around 4:00 p.m. near the intersection of Galley and Murray in east Colorado Springs. There, law enforcement came upon an adult male suspect. A struggle ensued and shots were fired, according to Police Chief Pete Carey.

Flick was killed; two other El Paso County deputies were injured in the gunfire, as was a Colorado Springs police officer. A civilian was also injured and taken to a hospital. The suspect died on scene. 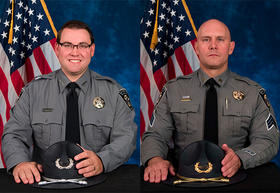 Deputy Scott Stone, a 5-year-veteran of the Sheriff's office, sustained a gunshot wound to the abdomen. At a press briefing Tuesday morning, Sheriff Bill Elder said Stone is in stable condition at Memorial Hospital, and that his injuries do "not appear to be life-threatening at this time."

Sergeant Jake Abendshan, a 16-year-veteran of the Sheriff's office, was wounded by "what appears to be shrapnel from one of the rounds," Elder said. He is in good condition.

As of Monday evening, CSPD Chief Carey said the police officer was in surgery and in stable condition. The condition of the civilian is not currently known.

"This is indeed a difficult day for our agencies," said Carey at a press conference at Memorial Hospital.  "Tonight, there is no distinction between our uniforms. State Patrol, Sheriff's Office, and the Colorado Springs Police Department... our hearts are all broken. "

In brief remarks on Monday evening, El Paso County Sheriff Bill Elder said the day, February 5, marked Flick's 11th anniversary with the department, and he was currently serving as a detective in the investigations unit.

"Deputy Flick was an outstanding member of my agency, and he will be missed, " Elder said.

Flick is survived by his wife and 7-year-old twins.

His death is the third in law enforcement over recent weeks in Colorado, and in a statement, Governor John Hickenlooper said,  "There’s no denying the grave impact this sequence of shootings is having on our state."

"We will once more come together to provide sympathy and strength for the deputy’s loved ones and pray for the recovery of those injured, " Hickenlooper's statement says.  "However, we also must come together and say enough is enough. We want each officer, every deputy, to know we are grateful for their service."

The governor has ordered flags to fly at half-staff on public buildings until sunset on the day of Deputy Flick's funeral.

Donations for the Flick family can be made to The El Paso County Sheriff’s Office Foundation, 1980 Dominion Way, Ste. 200. Colorado Springs, CO 80918.